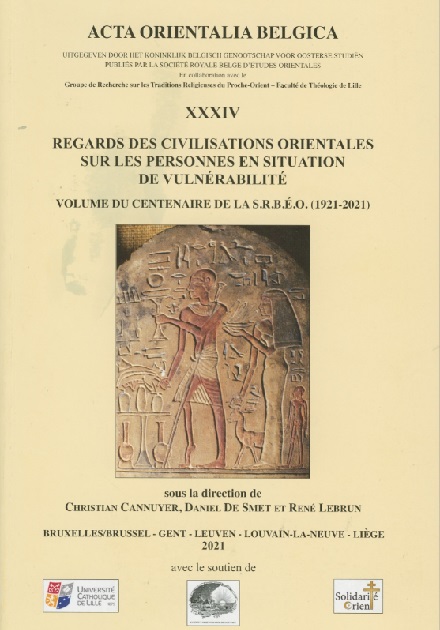 Belgium is he birthplace of comic strips in French. Its two main artists were Hergé and, after WW2, his close assistant Edgar P. Jacobs as a colourist. Egypt was one of their favourite subjects. Jacobs’ Mystery of the great Pyramid was a pioneering masterpiece based on real antiquities and books. Moreover, he received advice and documentation from egyptologist Pierre Gilbert (Musée du Cinquantenaire, MRAH/KMKG, Brussels), who drew the hieroglyphical inscriptions for him. We carried out a detailed study of some parts of the scenery. Next we started looking for one of the protagonists of the adventure, Dr Grossgrabenstein. He was a rich german antique dealer and amateur digger, identified by most specialists as Jean Capart. This survey gave us the opportunity to bring to light a recent deception of the worst taste around that german name. Finally, we underlined the initiatory aspect of the story. Jacobs created a masterpiece of the 'fantastic realism', mixing past and present, an initiatory quest whose roots came from egyptology, occultism and masonic spiritualistic rituals, but without anything to prove that Jacobs was ever affiliated to a lodge. Nevertheless he supported the positive ideals of progress and humanism professed by freemasonry.

Although it has only been sparsely studied in egyptology, the topic of disability in ancient civilization is, however, essential. Thanks to it, it is possible to draw a more realistic portrait of society and thus to understand the egyptians'attitude towards a different, fragile and infirm being. With some selected examples in archaeology, we wish to shed light on the presence of physically vulnerable people and on the gestures that can still be detected on their remains. Then, it will be possible to determine what comes under the integration or exclusion of certain individuals, such as the function they occupied during their lifetime. In addition, we will discuss some iconographic characteristics concerning the three most representative groups of disability in Ancient Egypt: the dwarf, the hunchback and the lame.

Based on Matthew 25:31-46, isaiah 58:6-7 and Tobit 1:16-18, Christian moralists have canonised seven "works of mercy" (feeding the hungry, giving drink to the thirsty, clothing the naked, welcoming strangers, visiting the sick, visiting prisoners, burying the dead), the practice of which, required by the divine justice, is a minimum condition of access to eternal beatitude. The ideal autobiographies of ancient egypt, from the Old Kingdom until the end of the Pharaonic culture, are undoubtedly the prototype. Concern for the weakest is linked to Maat, the right balance of the cosmos and society, and is, as in Christianity, the sine qua non condition for access to immortality among the gods. This social morality and this conception of man's ultimate ends based on the basically very simple principle of acting for the benefit of others are still very relevant today.

Why is it necessary to go through a sacrifice, and therefore the killing of an animal, a vulnerable being, to maintain or restore the link between man and the divinity? Does the Bible shed any particular light on this question, which concerns the entire ancient world? Indeed, if animal sacrifices are a widely attested practice throughout the Mediterranean basin in ancient times, very few explanations are given as to its basis. In this paper, we shall attempt to address this issue and explore the meaning, anthropological and theological reality behind the practice of animal sacrifices, particularly in the Old Testament. In order to do so, after having analysed the biblical narratives relating the birth of sacrifice in Gen 1-11, we have drawn on the work of a few rare researchers who have ventured to tackle the question, in particular the exegete Alfred Marx and the anthropologist René Girard.

In the Aegean world, people in fragile situations are almost non-existent. This is mainly due to the state of the documentation available. Only a few scenes of pugilists and, in Mycenaean Greece, combat scenes show people in vulnerable situations. They are especially attested in the 16th century, with some extensions in the wall paintings of the Mycenaean palaces. We will look at how aegean artists portray the unfortunate adversary.

This article examines the origin of states of fragility or marginalisation that affect certain people or certain categories of the population, either in civil society in the case of Brahmanism, or in a monastic society such as Buddhism. In both cases, the fragility stems from condemnation and punishment: in Brahmanism because of mixed marriages that violate the principle of caste separation; in the Buddhist community because of conduct incompatible with the spiritual vocation of the monk or nun.

Gregory of Nazianzus always fled his responsibilities, whether as a teacher in Athens, a priest in Nazianzus or a bishop in Sasima. And yet, he demonstrated exemplary courage during his short stay in Constantinople. This transformation could be accounted for by his release from the hold his father and his friend Basil of Caesarea had imposed on him.

The article is essentially devoted to a treatise by John Chrysostom in which he opposes the synesaktic monks of the time, "sarakoton" monks who, for the most part, live with virgins while practicing continence. Others among those monazontes, that is to say monks in the first meaning of the term, experience marriage without sexual relations. This primitive monastic way of life was condemned by the bishops and the "classical" monks.

The physical and mental characteristics and deficiencies of Muḥammad have been invoked in order to explain how he became a Prophet. Some have even described him as being invalid or insane. Not one of those suppositions resists a critical historical evaluation. Only the scene of the Opening of the Breast may have some historical basis, even if gradually transformed and embellished through tradition by successive alterations, so as to become almost unrecognizable in the end.

Several scholars have tried to describe the social milieu in which Shi‘i movements (such as the ghulāt "sects" and Ismailism) developed during the first centuries of Islam. However, such a sociological and anthropological approach is problematic due to the lack of reliable sources. In this paper, I will examine the scanty information available about the biography, origins, formation and social background of some Shi‘i heretics. The largest part of this information is provided by hostile sources, heresiographers and polemists referring to huge complots against Islam (Sayf b. ‘Umar, Niẓām al-Mulk, Ibn Rizām / Akhū Muḥsin). They present the heretics as imposters having poor jobs, such as ox drivers, butchers, cart drivers, linen weavers or feltmakers, often marked by physical deformations or diseases such as leprosy, teaching their corrupted doctrines to a Lumpenproletariat of illiterate countrymen. In most of the cases it is impossible to determine if such qualifications are sheer calumny, or if they contain some historical truth, as there is some evidence that Shi‘i missionaries used codenames and different forms of disguise in order to hide their true identity.

Among the slaves present in the medieval Muslim domain, eunuchs constitute a special class. Although castration was forbidden, the trade in eunuchs was not, hence their presence often with men of power. The doctor was rarely called upon to perform castrations and if that was the case, he turned a blind eye. If the practice is documented in the 9th and 10th centuries, it seems to attract less attention later on without disappearing.

This article aims to present the hypothesis of an oriental transfer of theories related to astral medicine, melothesia or Iatromathematics, and to propose some examples of Babylonian, Persian, Zoroastrian and Arab influences that have allowed its astonishing syncretism. Formally and practically, astrology, the divinatory use of celestial phenomena, takes different forms depending on the context in which it evolves, but we will not dwell on this point.

This article intends to give an overview on the development of the hospital network in the Seljuk domains and in the Ottoman Empire. Special attention is given to the specific treatment of music therapy in cases of mental diseases and to the evolution of medical education, stressing the role of some Sufi dervishes in connection with religious schools (mederse). In relation with recent epidemics across the world, the attitudes towards the plague contrasting with the early developments of quarantine and lazarettos in Western Europe are analyzed. A reference is made to the emergence of vaccination against smallpox in Istanbul in the 17th century and its transfer to the UK and France in the 18th century.

Taha hussein (1889-1973) and Abū-l-ʿAlāʾ al-Maʿarrī (973-1057) are two prominent figures in Arab literature and culture. The blindness that struck them both in childhood destined them, like so many others, to be reciters of the Qur’an at religious ceremonies and social festivities. But by overcoming their handicap and their pre-determined destinies, those two extraordinary characters expressed very early their will to surpass themselves and to face the hazards of life in order to acquire knowledge and to shine through their works which defy time. This article is merely a reminder of the main stages of their lives and the works they left us, in order to illustrate the undeniable creativity that emerges from their writings and to show how truly visionary they were when they set out to critically describe their respective eras.

This paper is a preliminary research made in Kayseri, Turkey in the summer of 2018. While we were there, we interviewed five informants, three Syrian men and two Syrian women. Our aim was to see how these informants were somehow influenced by their mother tongue (i.e Syrian Colloquial Arabic from Alep) while they were speaking in Turkish. We asked each of them the same questions separately and recorded anonymously the five interviews which we transcribed afterwards. In our research, we analyzed the characteristics of the languages used in the background (i.e Standard turkish; Kayseri Colloquial turkish: Modern Standard Arabic and Syrian Colloquial Arabic), and based on Standard turkish and Kayseri Colloquial Turkish, we investigated the influences. Those influences were either morphosyntactic, lexical or phonological.

Among the minority communities of northern Iraq who were recently under severe threat from Islamic State jihadists, the Yezidis have one of the most remarkable legacies of any tradition in the Middle East. Yet not just their religious and material culture but now their entire existence is in peril as entire populations seek refuge from their violent oppressors. The Yezidis have been misunderstood and persecuted for centuries. Predominently ethnic Kurds, until now they have succeeded in keeping their ancient religion – an intricate system of belief influenced by Zoroastrianism and Sufism – alive despite the claim that they are 'devil worshippers'.